Tokens schmokens - Global Poker chooses custom poker chips over stamped wooden nickels to promote their brand. Our chips are full-color and coated with a wear layer. They are waterproof and much more durable than a wooden nickel. Check out a few of the most recent 25,000 custom chip batch we made for Global Poker's Nascar promotion. 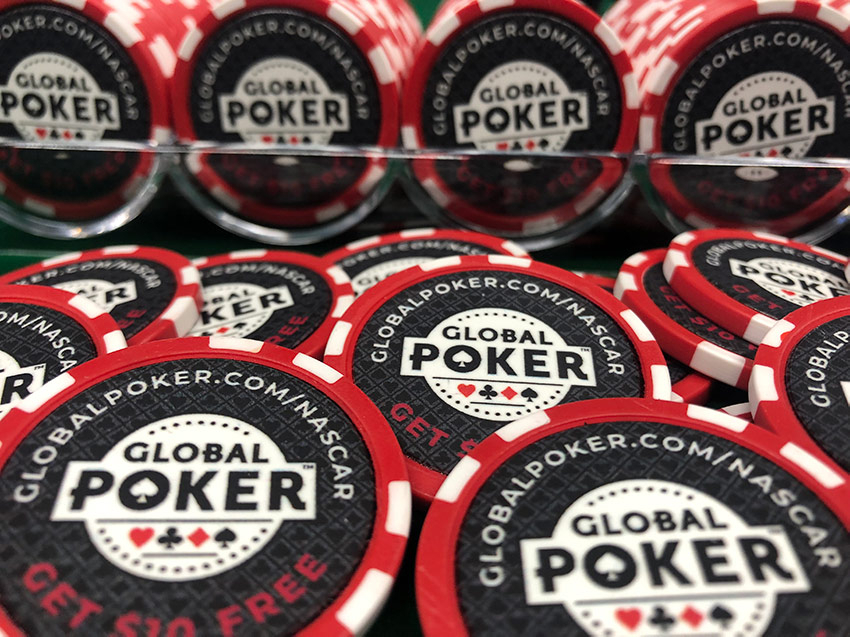 ST. JOSEPH COUNTY, Ind. -- A simple poker chip that you would find in a casino, is also in the pockets of employees at the St. Joseph County 911 center. The center’s Peer Support Team created the poker chip to remind employees help is available as they deal with the impact of the job. The chip displays the department’s logo with the words “No one fights alone.” “It’s just that reminder that even on a really bad day, sometimes in this room with all of these people, you just feel like you’re the only one. And that’s not true,” said Team Leader and Dispatcher Dan Tinkel. That collaborative idea came to life last week as the team passed out poker chips to workers to keep in their pockets, lockers, or wherever they go. Not only are the chips physical signs to employees, they can also be a sign for help if one is placed in front of a member of the team. “Sometimes when you need help, when you need to talk, it’s hard to take that breath and go “Hi, I need a moment of your time, I need some help,” Tinkel explained. “It’s like where do you start? So instead of having to take that breath and figuring out what to say, you can take the chip and hand it to one of us, and we know that’s you saying “I need a moment of your time, or maybe I need a lot of moments of your time.” Dispatchers say the mental health of 911 operators is often overlooked. “We deal with people at their worst moments,” said Tinkel. “It builds up over time, and even if you say, “Well it’s not my family, it’s not my problem, I go home at the end of the day,” it sticks with you.” Even though the department is sometimes included in Critical Incident Debriefing Teams of police and fire agencies, dispatchers say their points of view are different. Instead, the Peer Support Team was built last November to help employees day-to-day to let go of stresses from the job or even outside the job.

Here’s a quick snap of some cases we’re sending along with casino chip sets for the celebrities and VIP players at the World Poker Tour Mending Kids event next week. 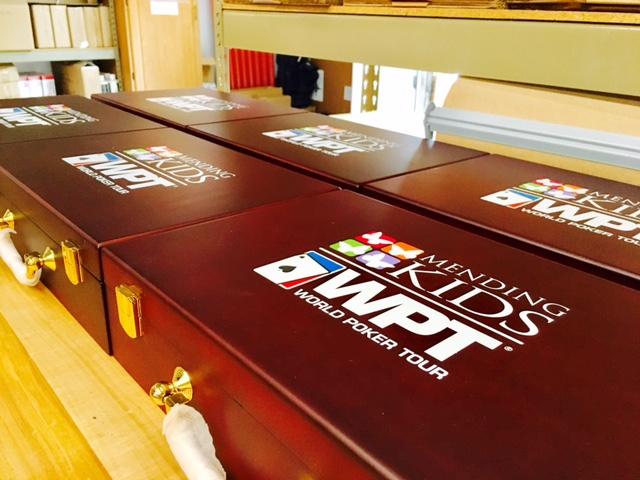 For all you Bobby Cannavale fans out there, check out his character Richie Finestra handle our clay poker chips on HBO's new show "Vinyl".

Style expert Corri McFadden went on You&Me this morning in Chicago to showcase some customizable father’s day gifts.  Our "legit" Clay Poker Chips (her words not ours) got a bit of air time in the video below. 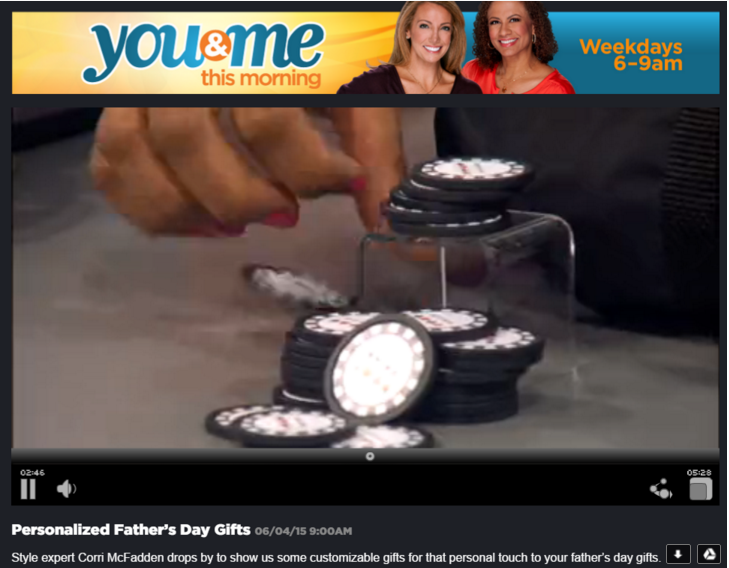 Is almost October already? The second-ever Europe-bet.com World Poker Tour National (WPTN) Georgia is coming up soon in Tbilisi, Georgia. We made the tournament and cash casino chip sets for their first event in May.

Shout out to Black Sea Cargo for flying the chips over for us.

Why Doesn’t CafePress Use Flash? ChipLab.com

There are many sites that sell customized casino chips (just do a search), but we haven’t found any that have an online design tool to allow you to create the chip itself.TheChipLab has take the extra step and has created a very nice Flash tool for designing your own casino-grade chip. The creation tool is very flexible and layer based. It’s not as powerful as new online image editor Fauxto, which is also Flash based, but it does the job.

So my question is, why don’t CafePress and Zazzle implement Flash tools to help people create customized products as well? Zazzle’s Ajax tool is pretty nice and allows some basic resizing and movement of images, plus the addition of text. Imagecafe is stuck in the nineties - their product creation tool has next to no flexibility at all. Neither are anywhere near offering what TheChipLab does.

Adobe has created awesome tools that tiny ecommerce companies like TheChipLab can use to provide a cool service to customers. It’s time for the VPs of Product at CafePress and Zazzle to wake up and reinvent their products, too. Adobe has done all of the heavy lifting, all they have to do is implement it.

The worst part of being on the Trail Blazers for Dan Dickau is that nobody plays poker.

“This is the first NBA team I have been on that doesn’t play cards,” Dickau said. “These have been the most boring flights I’ve had in the NBA.”

But one consolation is being able to be a hands-on partner in his burgeoning business, which plays off his love of poker.

Dickau is a co-founder of ChipLab.com, an online company that allows customers to use a software tool to design their own [custom] poker chips. Once a customer decides on a design — it could be a logo, words, a picture — the high-end chips are delivered within two weeks.

“What sets us apart is the software,” Dickau said. “It’s a design tool that you can make whatever you want on the poker chip, and we have final product to you in two weeks. With the Internet these days, you can do anything with any image or picture you want. The chips are limited only by your imagination.”

The Web site launched in August, and although it faces the usual challenges of a start-up business, Dickau says it is showing encouraging signs of growth. More than 750 people have registered as users, and more than 100 have designed and purchased sets of chips, which cost roughly 93 cents a chip.

“It’s a risky business, but it’s to the point where we can see potential, because you can do literally whatever you want to the chip, as long as it’s legal,” Dickau said. “There are tons of fonts, sizes, borders. . . . We’ve seen some pretty cool chips come through.”

Many NBA players invest their money or have financial planners, but Dickau, 28, is a rarity in that he is helping create and run his business while in the prime of his career. His interest in business grew last December when he tore his Achilles’ tendon, ending his season.

“I know basketball is not going to last forever,” Dickau said. “And last year, when I got hurt, it was the first time I really sat down and realized that an NBA career can be a short thing. I started thinking that I need to see what I want to do when I’m done playing.”

That thinking was not-so-subtly nudged by family friend Chase Schwatka, 22, a senior at the University of Portland. Two years ago, Schwatka visited the Dickaus at Thanksgiving and tossed a poker chip toward Dickau.

The thrill of starting the Portland-based company and seeing it grow has filled a void with Dickau that was created when he joined the Blazers. Much to his chagrin, nobody on the team played cards.

“No one. Not one. It’s frustrating,” Dickau said. “I’ve read more books this year than ever.”

Last year in Boston, Dickau said the players couldn’t wait to get on the plane to start playing their game of choice: Texas Hold ‘Em.

“There were seven or eight of us who would play every flight — Paul Pierce, Ricky Davis, Brian Scalabrine, Ryan Gomes, Kendrick Perkins,” Dickau said. “My nickname on the team became ‘Runner Up’ because I swear I took second place every time. It was the most frustrating run of poker I’ve had in my life.”